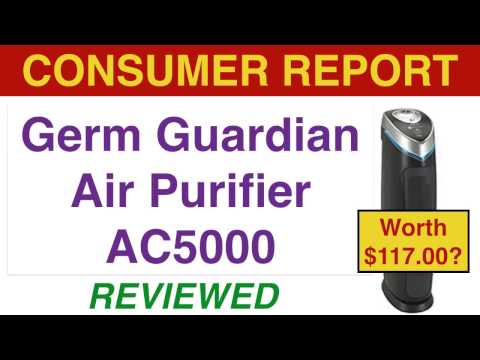 Here’s a review of the germGuardian AC5000 air purifier.

Here’s a review of the germ guardian air purifier AC5000 review. Some of the specs are the price is one hundred seventeen dollars. It does 197 square feet so it’s in a small to medium sized room. germguardian has three speeds. the replacement hepa filters cost $46 that’s for the hepa and the carbon. That brings your first year cost over two hundred dollars. It has three air purifier technologies hepa for dust and pollen, carbon for odor, UV and Tio2 for germs and viruses. The pros are that it will be good for allergens, it’s quiet, it has a slim design and it’s somewhat affordable. The ac5000ac cons are it’s more for a small room, under 197 square feet means not that large and it only has three technologies. None of them are washable – no pre filter – so that comes down to about 60 cents per square foot which makes the germguardian 5000 a little bit on the high side.

The hepa filter replacement costs are high at $46 which you’ll probably have to change every three to six months, depending on how much dust you have in your home. The other air purifier to look at is a six-stage airpodcleaner MT2. It does twice the square footage and like the germ guardian ac5000 it has hepa, carbon, UV but it also has a pre-filter that’s washable which will catch hair Dust and pollen. It also lets the Hepa last longer by doing that. It also has a washable electrostatic. Electrostatic is very good for pollution, odor and any kind of smoke. And then it also has negative ion – ions with is what makes the air really healthy – it’ll improve energy, thinking, help you sleep better, it also kills mold. The difference between an indoor air and outside air is in nature the number of negative ions is high.So i really like have a negative ion. So as a final comparison of the two the Germ Guardian ac5000 air purifier has three stages. The next number is incorrect it’s not 120 it’s actually 197 square feet. The germ guardian hepa filters are forty-six dollars. It costs a hundred seventeen dollars. The airpod mt2 has twice the stages so besides having hepa carbon and UV it also has electrostatic, a pre-filter, negative ion and by doing twice the square footage it actually costs half the cost per square foot of the Germ Guardian. The filters are almost half the price of the germ guardian filters and that includes HEPA and carbon combined so my choice would be the MT2 air purifier it’s six stages, affordable replacements, and as a money-back guarantee you can find that at airpodcleaner.com. so the difference between three and six stage units are just wanted to mention that together the six stages get rid of pollen but they also help the immune system work less because they get more things out of the air so the body can rest recover better so that’s the mt2 airpodcleaner air purifier – it’s a hundred nineteen dollars at http://www.airpodcleaner.com

You may have missed