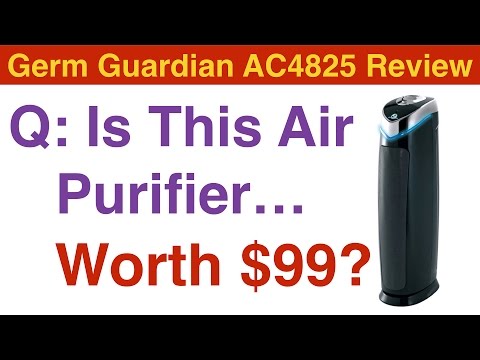 http://www.airpodcleaner.com. We tested the Germ Guardian air purifier model ac4825 and here’s what we found.

Here’s a quick review of my Germ Guardian air purifier AC4825 . We’ll take a look at the technology and review some of the reviews, hepa filter cost, pros and cons and then we’ll see if we can find a better air purifier in the same price range . So the price is $99.99 and it covers 120 square feet which is small. So for a 10 by 12 rooom – a dorm room or very small child’s bedroom perhaps. With three speeds and replacement filters you have to change about every six months for that small room. So it’s about thirty-eight dollars every six months for hepa filters and that’s 29 for hepa filter and 9 dollars for the carbon and so your first year cost could be about a hundred seventy six dollars. The germ guardian 4825 has three technologies for cleaning, your primary ones, you’ll find hepa for dust and pollen and carbon for odor and UV for germs and viruses removal. The germ guardian pros are it’ll be good for allergens. it’s quiet, it’s got a slim design, it’s pretty affordable at $99. The germ guardian cons are that it’s a small room so 120 square feet that’s about $1.20 per foot so that’s kind of expensive to clean the air.

And it only has three technologies it doesn’t have any washable filters which would be nice and there’s no pre filter which actually helps the HEPA filter last longer because you can wash the pre-filter which is for hair and dust and then the filter replacement costs are expensive. So let’s take a look at a different one this is the six stage airpodcleaner MT2 air purifier it covers 400 square feet. It has hepa, and carbon and UV like the germ guardian air purifier but it also has a pre-filter that’s washable for hair and dust. It’s also has electrostatic which removes pollution and odor and that’s washable and then it has negative ion which is for energy and help you think better sleep better and it actually will help get rid of mold negative Ion is something also if you’re indoors in the winter because the air gets very dead. Negative ions really makes the air very alive so Comparing the two the germ guardian 4825 is three stages 120 square feet and $39 for the HEPA and carbon. its 99 99 and then for twenty dollars more you get the six stage airpodcleaner MT2 and that’s with HEPA filter, carbon filter, UV plus electrostatic, pre-filter, negative ion, and that’s going to run about 33 cents per square foot. So it’s actually better than a third of the germ guardian air purifier ac4825 because it’ll cover four times the square feet and then the HEPA and carbon which are actually bigger than the germguardian air purifier are actually $24 so i would probably say the mt2 air purifier is a better value at six stages replacements for twenty-four dollars and you can find that Airpodcleaner.com . The reason for additional stages that the six stages not only get rid of pollen they also help cover the immune system with more support like UV and negative ion so the body can rest and recover. So that’s the aipodcleaner MT2 and it’s $119 at http://www.airpodcleaner.com

You may have missed